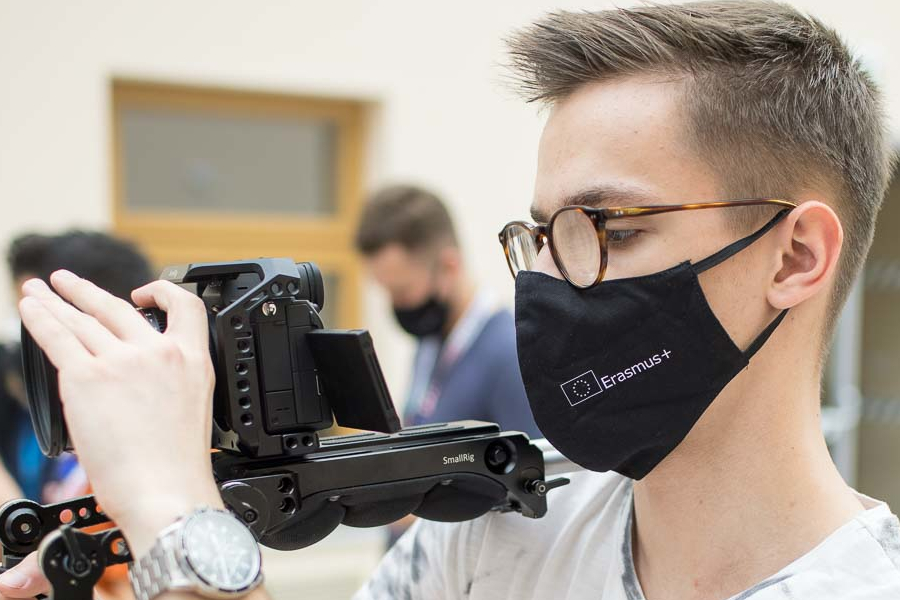 Working on international film set, many friendships, gaining lots of new skills and opportunity to include short film in your portfolio – participants of the #followme – Youth Movement for Social Change project, are leaving Radom with extremely precious experiences!

Social ads with a mission

First meeting took place in Kamienica Deskurów, a impressive facilty placed in a historical part of Radom. After the official opening speech from the organizers, young filmmakers received their welcome packages. All participants emphasized that social issues like: hate, violence, hate speech and addictions which were the subject of advertisements are extremely important for young generation. Young people often don’t have a chance to share their thoughts on those issues with parents or peers. Creative work on films was not only an opportunity for practicing professional skills, but also a chance to discuss important social problems.

The next day was dedicated to creating screenplays for social ads in groups. Participants have met with the film director Piotr Dylewski, with whom they discussed the basic rules of creating the script for an advertisement. Dylewski emphasized, that modern advertisements are also an example of art, and they can arouse equally strong emotions as like full-length films. Then thanks to the tips from mentors,  participants could learn, how an idea created during a brainstorm could become one consistent text, which will be a work material for actors, director and editor during filmmaking. Another mentor – Robert Gajzler conducted a practical workshops about the production of a film image. Participants could learn how to operate a professional equipment, that is used on the biggest film sets in the world.

In the third day of workshops young filmmakers focused on the sound in their films. Mateusz Irisik, polish film academy winner for sound design in “The Eccentrics. The Sunny Side of the Street” shared his knowledge with the participants. The expert explained fundamental principles while working on the film sound.

Film as a modern tool of social prevention and education

On the same day participants took part in a debate „Film as a modern tool for a social prevention and education”. The guests of the event were specialist in the field of creating innovative activities in education and social prevention – Phd Andrzej Gołębiowski, Beata Domaszewicz, commander Justyna Stanik-Rybak, Łukasz Gierek, Jarek Basaj, Magdalena Dygała, Bartosz Bednarczyk and Przemysław Bednarczyk. Invited specialists were talking about the most effective initiatives carried out by them and also about working in the field of social education.

Working on a film set

The next two days the participants have spent on a film sets. During the shooting, they have used  urban spaces of Radom, the filming took place also in the city’s cultural centers. The last day of the project was dedicated to editing and post-production of completed films. Participants were working in a professional studio called Pracownia Nowych Mediów in Radom.

The final effects of the work of young filmmakers were presented during a special gala summing up an intensive week of work. The event took place in Mazowieckie Centrum Sztuki Współczesnej „Elektrownia”.

#followme 1st group created a film „Silence hides violence”. The film’s protagonist is young man, who prepares a meal in the privacy of his own kitchen. At one point, screams come from behind the wall, someone is clearly in danger and needs help. However, the man doesn’t react and calmly continues slicing vegetables. The ad draws attention to common issue of society ignoring the acts of violence and aggression that are happening around us and encourages not to remain silence in such situations

The participants from #followme 2nd group created a film called „It’s a joke”, focusing  on hate speech issue. The plot of the film takes place during a stand-up. The performer crosses a thin line, in which joke turns into a mockery of one of the participants. The final slogan of the film is: „Stand-up against hate speech”.

The advertisement from #followme 3rd group is called: „CYBERBYLLYING 2021: 5 STARS”. Actors play the role of popular people from the world of show business, who read hate comments about themselves and they respond to their authors in a funny way. The creators of the film emphasize that everyone has the right to express their opinion online only if they don’t hurt other people.

The social advertisement made by #followme 4th group is called „Everyday’s Work”. Two-minute film shows, how easy it is to fall into the trap of addiction and how innocently it begins. There is only one actress in the picture, no sentence or word is spoken. What is happening with the heroine is perfectly emphasized by the soundtrack. In the final scene, the helpline number for people looking for help in addiction appears.

Participants of that group created another, longer film called “Nosedive” also about the topic of a drug abuse. The young filmmakers decided to tell about the main reasons, why people fall into the clutches of addiction. They are often sad, feeling unhappy and alone. That situation is then used by the people involved in drug trafficking who promise quick escape from problems.

Short films created by the participants of #followme – Youth Movement for Social Change not only shows the artistic potential of young people, but most off all the movies were created with great sensitivity, maturity and the accuracy of observations.

The gala was also a moment of summaries and farewells with friends and mentors and it was very emotional. All participants agreed that being involved in the workshops allowed them to develop their creative skills but also was a chance to gain valuable experience in working in an international group.

We would like to thank all participants, mentors and institutions without whom this project could not take place!

The “#followme – Youth Movement for Social Change” project
was held with the support from European Union ERASMUS+ Programme.

The organizer of the project was the FILMFORUM Association.

Workshops were held with the support of Pracownia Nowych Mediów
and Miejski Ośrodek Kultury „Amfiteatr” in Radom.

WSZYSTKIE AKTUALNOŚCI
previousCall for entries for the 20th CINEMAFORUM
nextWe uncover the details about the upcoming Polish-Norwegian Film Festivals Cooperation!