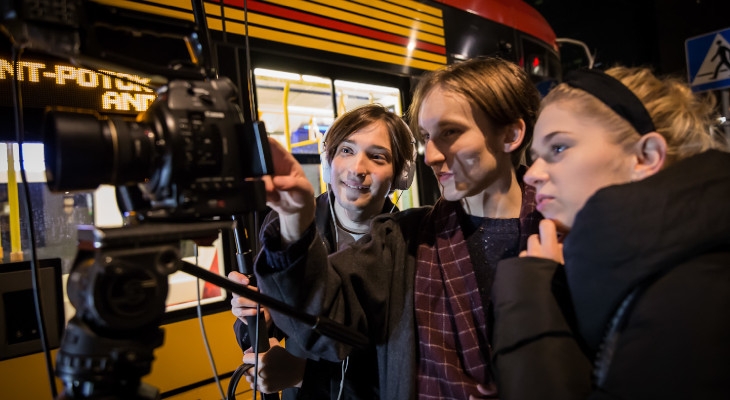 Over the past two months, young filmmakers have been producing short film forms devoted to the different faces of contemporary Warsaw. As part of the 4th Youth Reportage Workshop, short television reportages were created, whose characters were the residents of the capital and the city itself full of contrasts. The effects of the work of young artists were presented on November 24, 2019 at a special show at the Kinoteka in Warsaw.

Dozens of young people participated in the 4th edition of Youth Reportage Workshops. Together with their supervisors Krystian Dulewicz, Robert Gajzler and Marcin Sadowski, they made four short films reflecting the atmosphere of contemporary Warsaw. The heroes of the reportage: “Major Kwiatek”, “Fight for the Bazaar”, “Without hesitation” and “Girl with eyes like lakes” are people whose personal experiences, choices and experiences have a decisive impact on their everyday life in Warsaw.

The goal of the Youth Reportage Workshops was to learn and practical experience of all stages of the television reportage production process – from concept building, documenting and script writing, to photos, editing, broadcasting and promotion. The course has been divided into two stages. The first is lectures and open exercises, the second – practical implementation of short reportage forms. The artistic guardian of the project is an excellent documentary filmmaker prof. Maria Zmarz-Koczanowicz, lectures and workshops as part of the project were also led by: laureate of the European Film Award, director Anna Zamecka, editor Przemysław Chruścielewski (among others “God’s Body” by Jan Komasa) and Marta Sikorska – PR specialist at the Warsaw Film School .

Participation in the workshop was free. Classes were held at the “A35 Lab” run by FILMFORUM at ul. Andersa 35 in Warsaw.

Videos made by participants can be viewed on YouTube:

„Fight for the Bazaar”

For 30 years surrounded by the same people, locked in her small space, Ewa does not lose her joy of everyday life. Although he spends most of his time in the bazaar, he notices how quickly and dramatically the outside world is changing. In the tangle of her crazy thoughts and insights, however, one can easily find one constant.

The film is based on the experiences of several people. The girls describe their illness and do not hesitate to talk about it. Mental illnesses have been a taboo subject in society for years. The film’s task is to break the stereotypes that circulate about people suffering from depression.

Katarzyna Smoluk-Moczydłowska’s musical identity is suppressed when a woman plays the role of an English teacher in a high school in Warsaw every day. How to find yourself between the world of mysticism and everyday life? Which of these lands is a dream, and which is happening ‘more’? And are you sure the one that is associated with the light of the sun?

Major Kwiatek is a nice and full of energy, older man whose life is poor, and yet full of colors, just like flowers in hand-made bouquets, which he sells from Warsaw’s Old Town. Love of flowers sets him apart from other people. The document presents his everyday life and struggles in solving constant difficulties.

The organizer of the 4th Youth Reportage Workshops was the FILMFORUM Association.

The project was co-financed by the Capital City of Warsaw.

ALL NEWS
previousTraitor and Marcel win at the WAMA Film Festival!
nextThe coming decade on the VoD market – perspectives and opportunities for the film industry