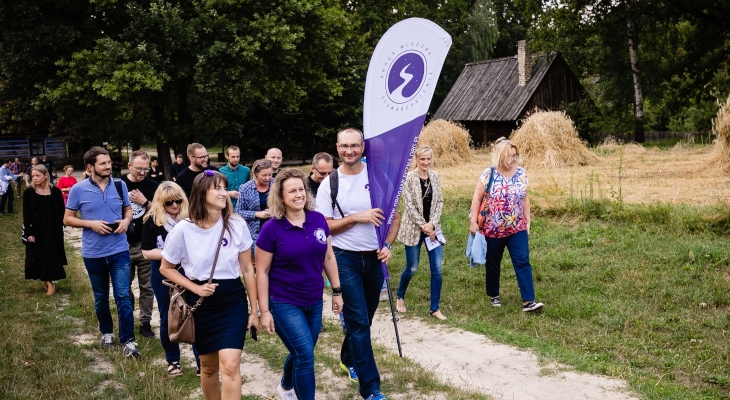 Radom is full of interesting places with high film potential, which guests of the CAMERA SUMMER had the opportunity to find out.

National Summer Film Meetings KAMERALNE LATO in Radom are created not only for viewers, for whom the organizers are preparing more and more attractions every year. The organizational team is ambitious about one of the festival’s most important missions – promoting the city among the young generation of film producers and filmmakers. Thanks to the support of local NGOs, Radom had the chance to once again boast of its film potential.

In 2019, the interesting and original proposition, once again addressed to representatives of the film industry, was included in the KAMERALNE LATO program. Mleczna Droga Association has prepared study visits in selected locations with the greatest film potential, which festival guests had the opportunity to visit traveling in vintage cars, thanks to the support of enthusiasts associated under the banner of Radom Classics.

– We are pleased that our many years of efforts in building the city’s brand and promoting Radom as a film-friendly place meet with such good reception of subsequent guests. We hope that the slogan “Filmowy Radom”, under which we organize study visits, will remain in the memory of young filmmakers when they consider where to shoot their next film – sums up Karolina Adamczyk, Director of KAMERALNE LATO. – We thank our partners who every year take care of preparing a new location route, selecting attractive places in the city and providing guests not only pleasant memories, but also a professional information package on potential film locations in Radom.

During the 12th edition of National Film Meetings, accredited guests had the opportunity to visit the Neo-Renaissance Town Hall, in whose courtyard scenes of the film “W ukryciu” by Jan Kidawa-Błoński, or the College of oo were made. Piarists, at the disposal of the Museum of Jacek Malczewski, in which there are many rooms with well-preserved period furniture, which can become an attractive backdrop for historical films. The participants also visited the Gothic Church of St. John the Baptist. The last point of the trip was the Radom Village Museum, an open-air museum located in a picturesque area surrounded by ponds, with over 16,000 exhibits and rich buildings: 19th-century country mansions, sawmill, mill, barn, or granary. Films that have been made so far in the Radom Village Museum include: “Dyrygent” directed by Andrzej Wajda, “Psy 2. Ostatnia krew” by Władysław Pasikowski, “Przedwiośnie” by Filip Bajon, and “W ukryciu” mentioned earlier.

The activities of local enthusiasts and activists in conjunction with the increasingly recognizable brand of KAMERALNE LATO make Radom, with its rich and diverse facilities, a chance to become an important center of Polish film production, recognized by young filmmakers and producers.

The organizer of the event is FILMFORUM, and the main co-organizer is the Provincial Police Headquarters in Radom.

The KAMERALNE LATO is under the patronage of: the Minister of Culture and National Heritage under the Culture Promotion Fund, the City of Radom, the Polish Film Institute, the Mazovian Voivodship Self-government and the ZAIKS Association of Authors.

Educational activities accompanying the Festival are supported by the European Union Program ERASMUS +.

The industry partners of this year’s edition are: the Polish Filmmakers Association, the National Chamber of Audiovisual Producers, the Mazovia Warsaw Film Commission, the Lower Silesian Film Center, Wroclaw Film Commission and StoryLab.pro.

The sponsor of the festival is the Embassy of the United States of America in Warsaw.

The organizational activities will be supported by the Festival: Mazovian Center for Contemporary Art ELEKTROWNIA in Radom and Mazovian Institute of Culture.

ALL NEWS
previousMeet new festival directors of the CINEMAFORUM!
nextResults of the SPOT – Social Pictures of Today project